My name is Melani Robinson and I’m a writer/blogger/podcaster, and online dating expert living in New York City. My daughters, Morgan and Chelsea, are adults now and living on their own in the city and I share my apartment with Kate and Nigel, my pups.

There is currently no man in my life and really hasn’t been one for many years. 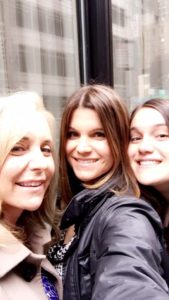 life. I was forty-eight years old, heartbroken and in desperate need of a fresh start in a place with few memories. My husband had died and I was not sure I would ever be happy again.

I decided I wanted to write so I began taking classes and joined writers’ groups. I learned I needed to build a platform if I ever wanted to get anything published. I was told blogging was a great way to do that but I had no idea what I’d blog about—until I decided to get back out there and began online dating.

I launched www.1yearofonlinedatingat50.com, which took off like crazy. Seems I wasn’t the only person dating lunatics. During that year the blog won an award, I was named one of the ten best online dating experts, and I began writing for The Huffington Post, which further expanded my following. By the end of the year, I’d reached dating burnout—over one hundred dates can have that effect. Hell yes, I earned that expert status.

I’m writing a book based on the blog and it’s almost finished. My daughter Chelsea, calls my online dating experiences a “shit show” and she’s probably right, but it does make for entertaining reading.

I also launched a podcast, Single Because: True Stories of Love, Dating and Other Misadventures where others tell their stories. I hope you’ll give it a listen.

I’m grateful to those who’ve followed along. There’s nothing I love more than to hear from you and I always respond.

“We must let go of the life we have planned, so as to accept the one that is waiting for us.”  Joseph Campbell My name is Melani Robinson and I’m a writer/blogger, and online dating expert living in New York City on the Upper West Side.