Rarely having the disposable income to hire it done has certainly contributed to the condition. In New York City there are people willing to do just about anything you don’t prefer to do–for a fee, of course.

Want a lightly toasted bagel and coffee delivered precisely ten minutes before you head to work in the morning? No problem.

It’s raining and your dog needs to go outside? Relax and let a dog walker wear the slicker. 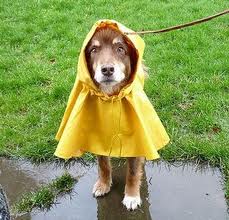 I don’t indulge in the many conveniences living here offers and sometimes gripe about what a pain in the ass it is to reside in a crowded city while doing everything for yourself. Especially as I lug a new vacuum ten blocks from Bed Bath and Beyond to my apartment. 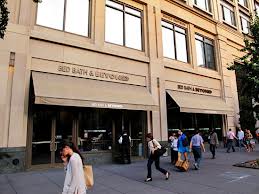 Last week I helped a friend empty her storage unit. She rented it seven years ago and the stuff had been inside, undisturbed, for all that time. Everything is crazy expensive in the city and storage units are no exception. Like most Manhattanites, she looked for ways to cut costs and paying to store forgotten possessions was a logical thing to chop. I told her if we could do it in three hours I was available as I had plans early that night (more on that later). We headed to Manhattan Mini Storage and got busy. I created three piles: Garbage, Sell, and Keep. Once finished she thanked me and commented on my physical strength as I lifted heavy boxes and suitcases from an upper level unit that required standing on a ladder and reaching inside. I am strong and I attribute that to my father. Being a girl never got me a manual labor pass. If something substantial had to be hoisted or carried I was expected to grab a side and go, without hesitation. Whining was never an option and I longed for gender discrimination at home (“Girls can’t do that!”). But since my dad did the grocery shopping and cooking along with the heavy lifting, the Equal Rights Amendment reached ratification in 1972 in one tract home on McKinley Avenue. 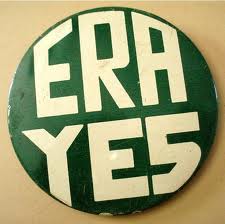 On Saturday I went to Home Depot. Just the scent of a hardware store makes me happy and there’s nothing I love more than walking the aisles while in my mind creating the next home improvement project I’d like to tackle. Many are just pipedreams—the result of living in a rental apartment where management might get testy if I walked in with the bathtub of my dreams and a sledgehammer. 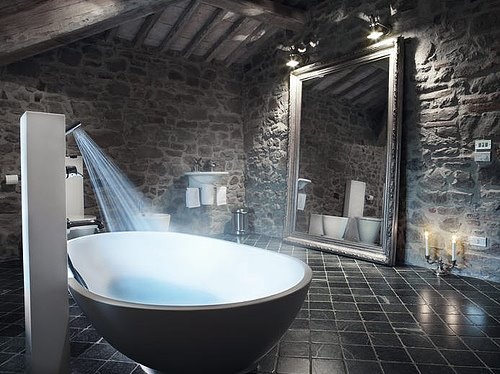 Still, I’m considering sneaking in some glass tile and grout for a backsplash in my kitchen. I’ve watched several “how to” videos on YouTube and I think I can do it. Saturday I was there to buy containers and several bags of potting soil.

On the weekend there’s a man who sets up a stand near my street on Broadway. He sells deeply discounted flowers and plants that have seen better days. I have a suspicion he gets his wares from the dumpsters of florists. I call him Dead Flower Guy and snicker when I see people actually paying for those wilted bouquets. I turned into one of those fools on Saturday when I noticed two (not too dead) azalea plants. The price was right and I bought them. My daughter Morgan brought the car to the 3rd Avenue Home Depot and we loaded the bags of soil and pots inside—she helped bring them into my building, too. Pedro (doorman extraordinaire) jumped up to give us a hand as he always does. “You two are always dragging in something heavy,” he said, laughing. 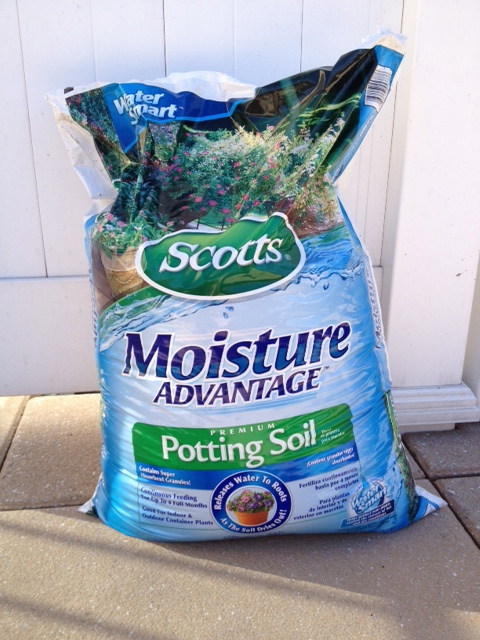 I planted the azaleas on Sunday afternoon. It was a beautiful day and it felt good to be in the sunshine on the terrace up to my elbows in dirt.

It was also a bit lonely.

I longed for someone to share in the toiling as well as the moment where one stands back and admires the accomplishment. 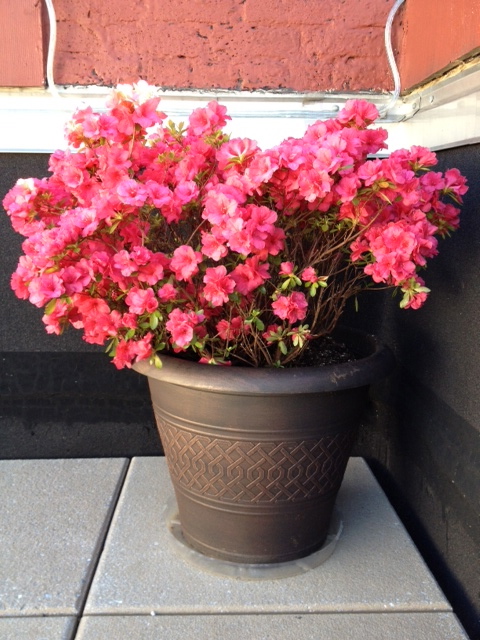 Not just any man. THE man.

Last Friday night I squeezed into shape wear and met a single girlfriend for drinks. Our goal was to find a happy hour spot where age appropriate single men gather. We started at Milos and went to another place nearby, but had no luck.

If anyone knows where men of a certain age gather after work in Manhattan, please share the love.

I haven’t been on a date since ending my year of online dating. As much as I enjoyed blogging about the experiences, one awful meeting after another took its toll. It has taken several months to consider dating again and that might explain gaining seven pounds. When I took myself off the market I was no longer competing with the plethora of walking x-rays who inhabit this city. OK, I’m a little jealous of their ability to survive each day eating only a carrot and I’ve decided to forgo Levain cookies and Empire’s snack cakes until I’m comfortable parading around my apartment in the nude with the blinds open.  I’m also two weeks into the Insanity 60 Day Challenge, Shaun T is still kicking my badonk, but I’ve noticed my body is starting to change.

It’s time to get back on the horse.

My life is dogma-free. You will never find me praying to God, Allah, Buddha or Jesus. I’m not even sure what I believe. I’m more comfortable sending my hopes to the ambiguous Universe. I regularly propel thoughts out there and then forget them until what I’ve asked for materializes.

Here are a couple examples:

“In Virginia,” she replied.

Two days later, Nigel was mine. I can’t imagine anyone thinking that was a coincidence. Thanks, Universe. 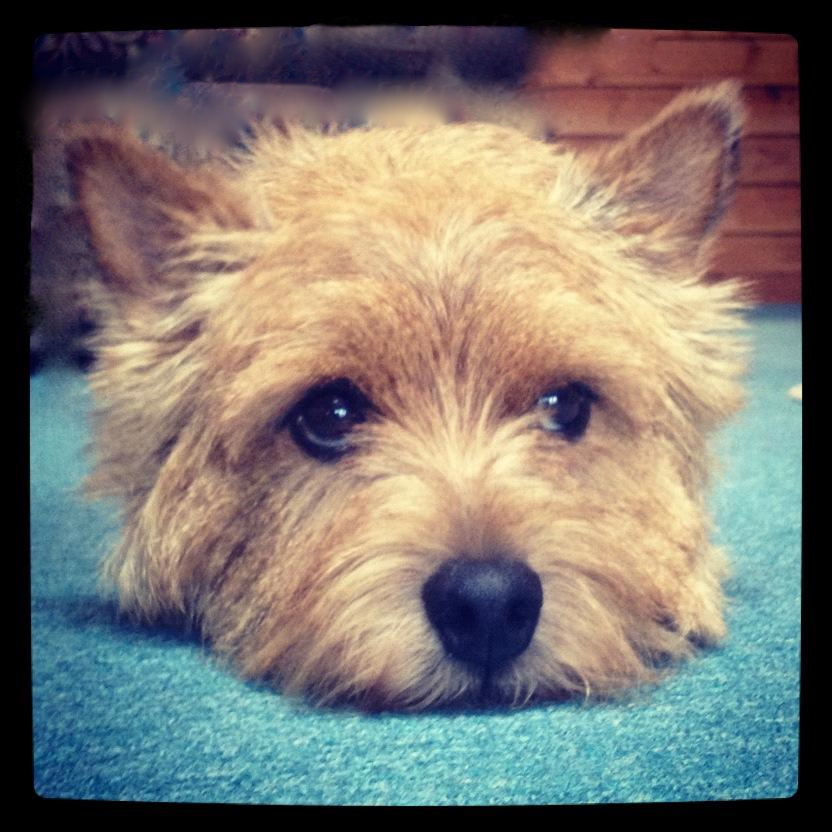 These are just two examples of things that happen often. That’s why I don’t “muscle through” life anymore. When something was difficult, the old me would plow through the muck no matter how tough–forcing the outcome. It seemed when I pushed hardest and got what I wanted it turned into a mistake. Now I know there’s a reason it’s not easy, something better is waiting if I can let go.

On Sunday, feeling lonely as I planted here’s what I asked for:

“This time around I want a man who’s handy. Someone who won’t roll his eyes but instead roll up his sleeves when I have an idea. He’s got to be sophisticated, though, and an Irish accent wouldn’t hurt.”

I know. The accent part was over the top but when sending thoughts into the ether of no deity, one is allowed to be a greedy bitch. Plus, “wouldn’t hurt” was only a suggestion.

I picture a fifty-year-old version of Gerard Butler, comfortable with a multitude of drill bits. The kind of guy who uses a level instead of determining a picture is straight by eyeballing it. I imagine we’ll tackle the occasional project together and he’ll do most of the heavy lifting. I can see us laughing as we work and when we’re finished, he’ll put his arm around me while we admire our accomplishment. Later that evening he’ll suggest I put on something sexy since he’s made a dinner reservation at Per Se.

If you dream, dream big, right? I won’t dwell, Universe.

“The most beautiful thing we can experience is the mysterious. It is the source of all true art and science. He to whom the emotion is a stranger, who can no longer pause to wonder and stand wrapped in awe, is as good as dead —his eyes are closed. The insight into the mystery of life, coupled though it be with fear, has also given rise to religion. To know what is impenetrable to us really exists, manifesting itself as the highest wisdom and the most radiant beauty, which our dull faculties can comprehend only in their most primitive forms—this knowledge, this feeling is at the center of true religiousness.” Albert Einstein